This was a project for Father’s Day 2017, take my father’s Colt 1911 and give it a makeover in a Coast Guard theme in recognition of his many years of service.  The pistol is getting my rendition of  a “Night Ops” Navel digital camo coating and followed up with a set of Magpul CoastGuard embossed grips. 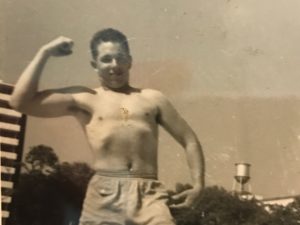 A Little About My Father

This is my Dad, well a very much younger version of him sporting game for the ladies on the beaches of Biloxi Mississippi back in the 1960’s. My father was in the Air Force for 4 years before moving over to the U.S. Coast Guard Reserves. He is much older now (of course) and retired from military service but few years back he was reminiscing about having a Colt 1911 45.cal. My father went on to say how he enjoyed his Colt so much and how it would be nice to handle one again even broken or in parts.

As an avid gun show attendee, I was sure I could find something that could foot the bill. It didn’t take to long before I came across a nice parkerized Colt 1911-A1 (80 series) that was reasonably priced. Anyone that attends gun shows will tell you that more times than not venders are trying to get top dollar for firearms so finding really great deals are rare. I picked up the firearm and saved it until Christmas that year (2015) and gave it to his as a gift, to the shagrins of my step mom.

I need a hobbie 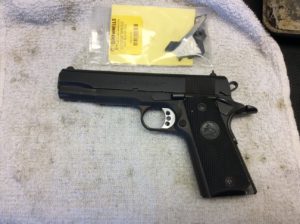 In late 2016 I started teaching myself gunsmithing. By early 2017 I was well on my way to being an expert on the series 70 and 80 1911’s available by several vendors including Colt, Kimber, Rock Island, SIG and Taurus. I was ready to start doing more advanced repairs and embellishments and commissioned my Father’s Colt to do my first trigger job. This consisted of a new Wilson Combat trigger, Wilson Combat Commander hammer and a new polished sear set. My dad was a good sport to subject his firearm to unknown customizations and even when it had to come back to me after it binded up a little at the range. I continued my education and before long I was stoning sear and hammer catches, adjusting stage 1 trigger pulls and producing very smooth and crisp trigger consistently. 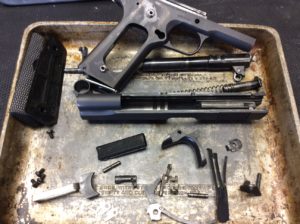 Back In My Shop For The 3rd Break Down

Time for the breakdown. The 1911 is a very functional design and easy to break down into its parts. As you can see from the image that the 1911 breaks down into about 25 parts. Instead of having different springs for the trigger, sear and hammer the 1911 uses a single 3 finger spring to apply different tensions to the different parts of the fire control group. This makes the assembly of the 1911 very easy to get back together. 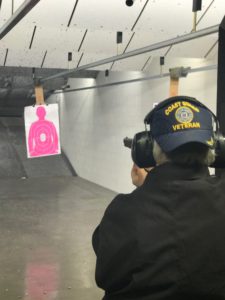 My father, my wife and I have a standing weekly range schedule that we maintain. Every Monday we meet at the local indoor range and brew house, yes only in Florida can you go to a indoor range to shoot firearms and drink beer, just not at the same time and beer always comes afterwards.  I, being a amature gunsmith, have my hands on all sorts of firearms and this gives us a chance to shoot a large and ever changing selection of firearms at the range.  I’ve started  doing stenciling on firearms during my coatings to produce some really nice embellishments. I’ve completed a Desert Camo and an Urban Jungle Camo but I hadn’t had a chance to try my hand at doing digital camo. In from stage right comes my father again! Who better to sacrifice, cough, scratch that, bestow the honor of my next stenciling job other than my father? 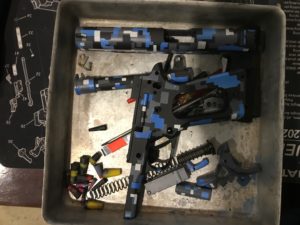 Hot out of the oven,

After a long Saturday cooking and cleaning it’s nearly finished. I had to do a full degrees of the firearm, gas off the acetone then the work really started. First I laid down a base coat in Ghost White Cerakote and flash cured that coat in the oven. Next, I let it cool and the laid down the first layers of stencils to produce my white blocks. The next layer was Sea Blue Cerakote followed by more curing, cooling and stenciling. I repeated this with Combat Grey Cerakote and then finally Armor Black Cerakote. Once I had the last layer applied, I cooked it for 1 hour to cure the coatings completely.  Allowed it to cool then started the meticulous process of removing all the stencils and refitting the firearms parts. Anytime you Cerakote a firearm you can expect it to tighten up the firearms fitting. This was apparent when I reassembled the firearm,  the barrel now had 4 coats of cerakoting which made the barrel sleeve too snug to allow the slide to rack a round. To fix this I have to modify the bore of the sleeve to allow for the needed clearances. Once this was done the firearm went back together really nice and retains a nice trigger pull and slide action. 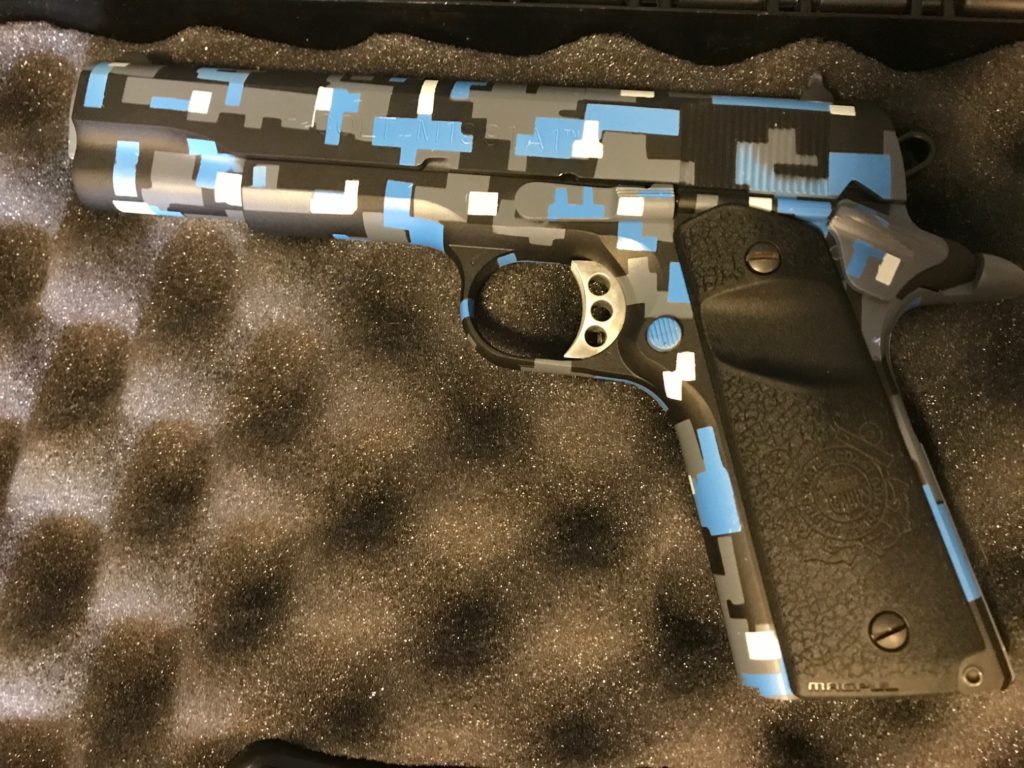 One thought on “Custom Cerakote CoastGuard Colt 1911 For My Father”