This project came from a trade I did with a gent. He had this “non functional” Tec 9 or so he thought and he wanted to trade a for a Ithaca Model 58 featherlight. 12 ga. shotgun. The shotgun was a pawnshop find that needed an extractor replaced which I did before refinishing it. I had shot it a few times and was ready to trade it for something new, this was something new!

A little about the firearm

The Intratec TEC-9, TEC-DC9, or AB-10 is a blowback-operated semi-automatic pistol. It was designed by Intratec, an American offshoot of Interdynamic AB. The TEC-9 was made of inexpensive molded polymers and a mixture of stamped and milled steel parts. In early versions the open-bolt design was deemed too easy to convert to full auto. Because of this, the ATF forced Interdynamic to redesign it into a closed-bolt system, which was harder to convert to full auto. This variant was called the KG-99. The TEC-9 and, eventually, TEC-DC9 variants were listed among the 19 firearms banned by name in the USA by the now-expired 1994 Federal Assault Weapons Ban (AWB). This ban caused the cessation of their manufacture and forced Intratec to introduce a newer model called the AB-10, a TEC-9 Mini without a threaded muzzle/barrel shroud and sold with a 10-round magazine instead of 20- or 32-round magazines.

This AB10 came to me broken,  I first had to fix the firearm before Cerakoting the pieces. In this case the extractor on the AB10 was mashed up against the bolt and the magazine had be dropped on its head a few times so was not feeding rounds easily. We readjusted the extractor and fixed the magazine and went to the range for testing. The Intratec was made to be easily fixed with only having a dozen parts making up the entire gun.

After I laid down a base coat of Magpol Dark Earth I placed my first set of stencils. On the second set I sprayed a patter into the layer providing more depth to the camp job. 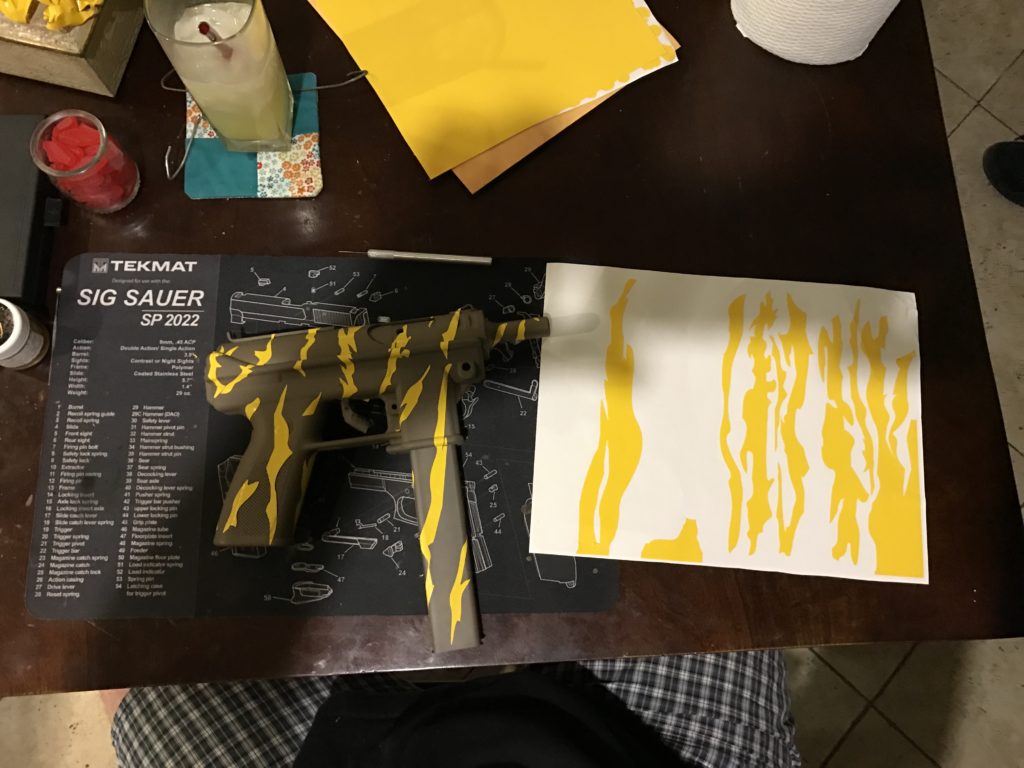 I coated all the main parts of the AB10 including the bolt with Cobalt black as the final coat. 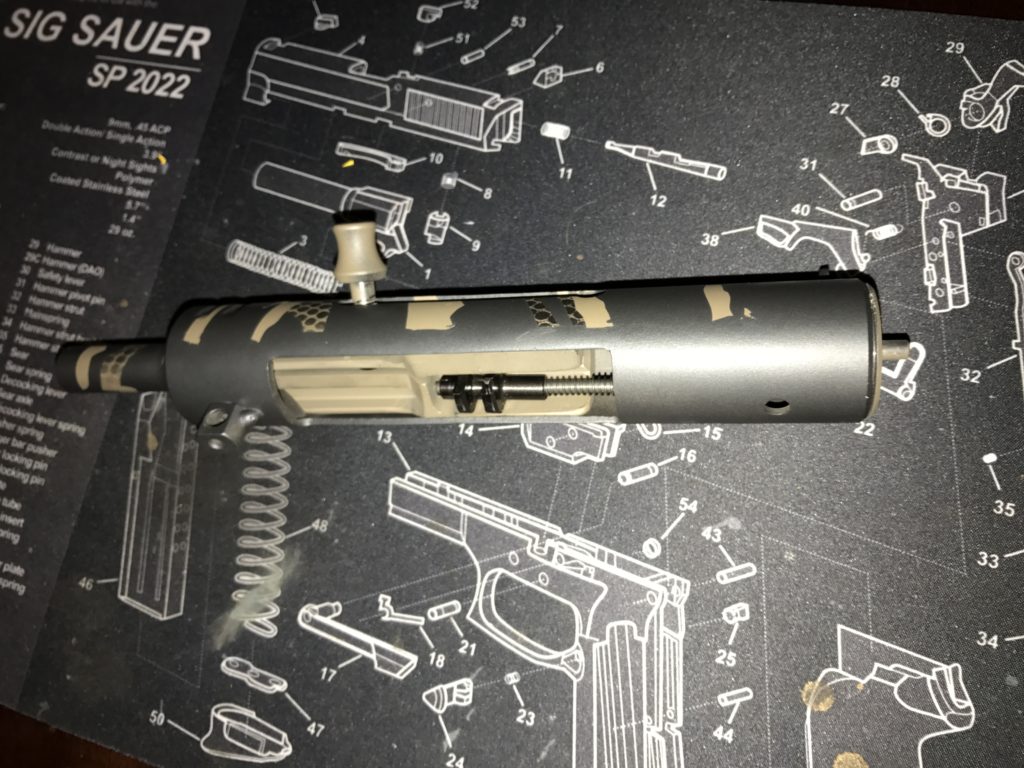 I fitted the parts during the stencil process so that the camo would be continuous across the firearm from the bottom of the magazine to the top of the action. 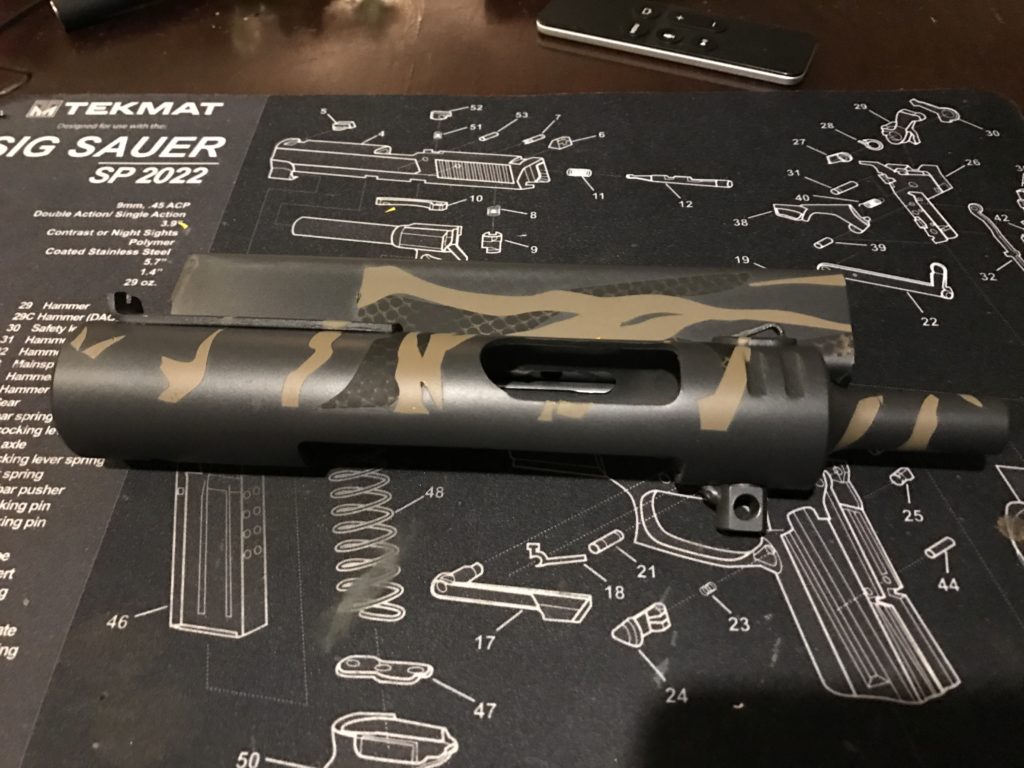 When it was all finished, it looked great! 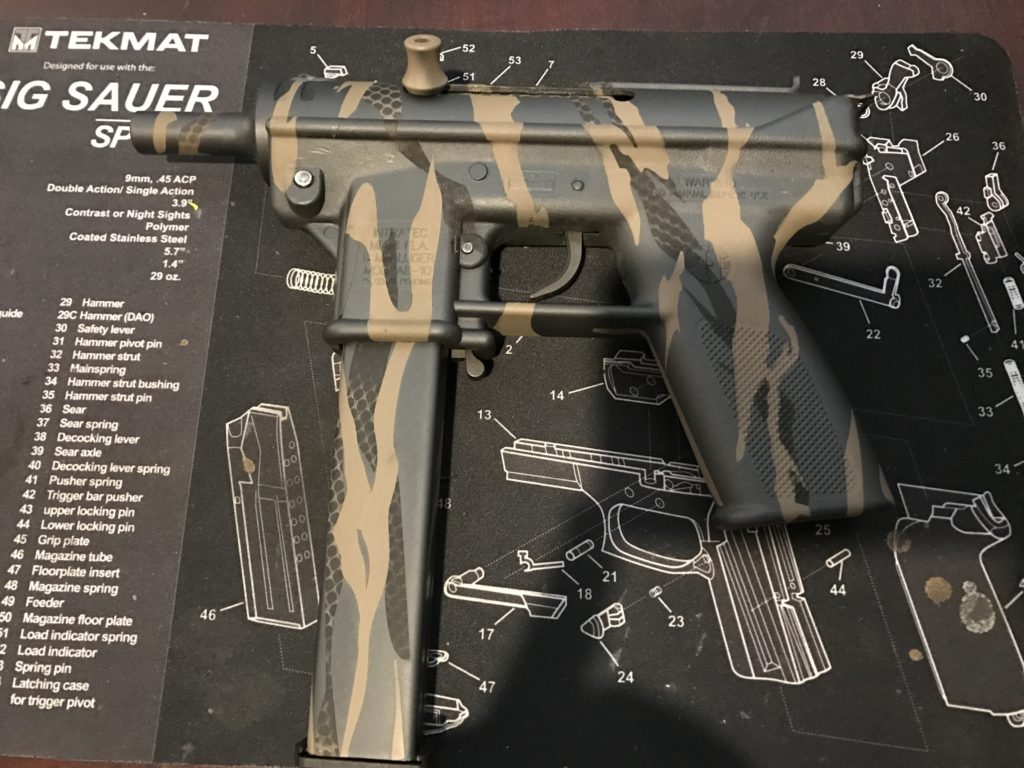 Went back to the range and it shot great to.